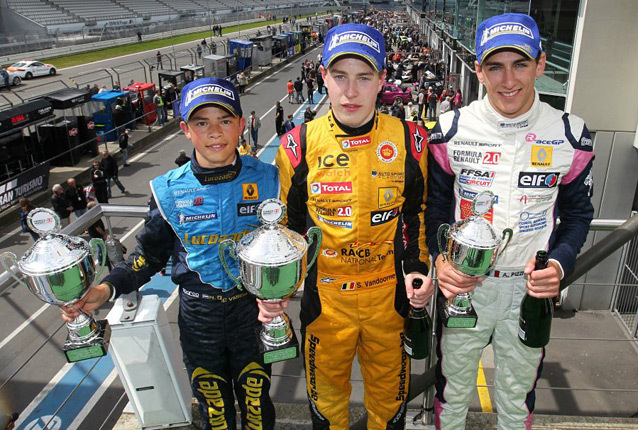 The Formula Renault 2.0 Northern European Cup saw maximum results for Stoffel Vandoorne. With two pole positions and two victories on the famous Nurburgring, the RACB driver for Josef Kaufmann Racing was a class of his own. The only one coming close this weekend was Mclaren talent Nyck de Vries for R Ace GP, scoring a first podium in his motorsport career in formula cars.

Qualifying started Friday morning under dry conditions. Vandoorne set the time to beat at 1:26.812 with quite a gap to the other 35 competitors. Finally, it was Nyck de Vries who could come close with 1:27.311. The second qualifying looked like a repititon of the first, with Vandoorne (1:26.769) and De Vries (1:27.381) on the first starting row, followed by Mikko Pakari and Pieter Schothorst on the second. 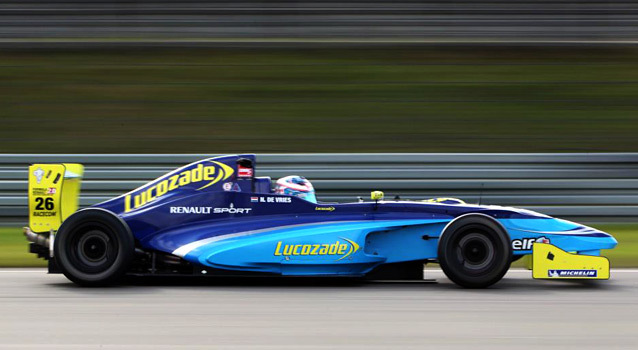 The fourth race of the Northern European Cup 2012 seemed to have a nice start; a dry track and a full grid with almost forty cars. The organization of the VLN, the host of this weekend, saw some problems with the starting lights leading to the cancellation of the start. After solving the problem, the race distance was shortened to 23 minutes and after another formation lap, all cars were on their way.

De Vries, who put down a strong performance in both qualifying sessions, had a bad start and lost five places. He fought back however, and drove to a fourth place in the last lap. Behind Meindert van Buuren, there was some heavy competition for the places in midfield. In the front, Jordan King and Pierre Gasly where fighting until the finishline for second place. After the chequered flag fell, Vandoorne won his third race of the year, followed by King and Gasly in that order. 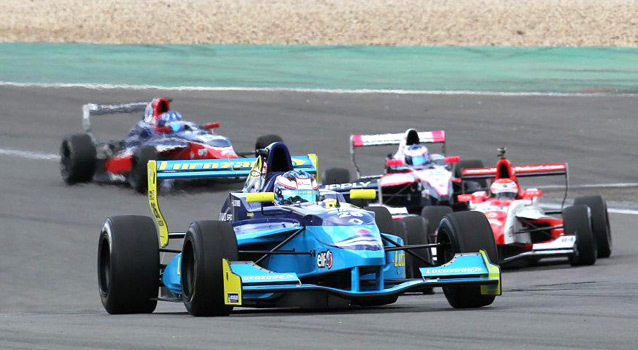 The second race started under dry circumstances and when the lights turned off, Vandoorne and De Vries drove away together. Pieter Schothorst also had a good start and crossed the starting line in third position. Shortly after, matters turned for the worse for Jakub Smiechowski and Shahaan Engineer. After a mistake from the trackmarshalls, Engineers car ended up in the middle of the track, causing a very dangerous situation for the other drivers. A safety car situation was initiated but could not be completed by the VLN organization, after which the race was temporarily stopped with a red flag. After all cars were safely removed, the fifth race of the season was restarted with 19 minutes to go.

With 31 remaining cars on track, Pieter Schothorst fell victim to Mikko Pakari. Both gentlemen had to leave their cars in the gravel bed of the Castrol turn. In the front, De Vries and Vandoorne had a fight of their own, staying in within half a second throughout the entire race. Finally, Vandoorne scored his fourth win of the season, followed by De Vries and R ace GP teammate Andrea Pizzitola.

Vandoorne took the lead in the overall championship standings with 122 points, and the now second placed Jake Dennis has only one point difference with MP Manor Motorsport’ Jordan King. The third and next round of the Formula Renault 2.0 Northern European Cup will be held at Motorsport Arena Oschersleben, on the 6th to the 8th of July.