The serious business began at La Conca, despite temperatures rising to 34 ° C, which is not without difficulties for the newer drivers in the WSK Euro Series. The first qualifying sessions decided the starting positions at Muro Leccese. The first objective was the long sequence of 35 qualifying heats, which will go on until Sunday afternoon along with 11 other races, pre-finals and finals. The reward could be victory in the continental series organized by WSK Promotion, and after Muro Leccese will be the last race of the season held at Zuera, Spain, on the weekend of August 5th.

Nielsen triumphs in KF2 Superpole. The Dane Nicklas Nielsen (Kosmic-Vortex-Vega) met the challenge of Superpole in KF2 with the fastest time of the session which is reserved for the 12 fastest in the class. Second place went to teammate Antonio Fuoco, who was the fastest in the first session. Third was the Monaco driver Charles Leclerc (ART GP-Parilla-Vega). 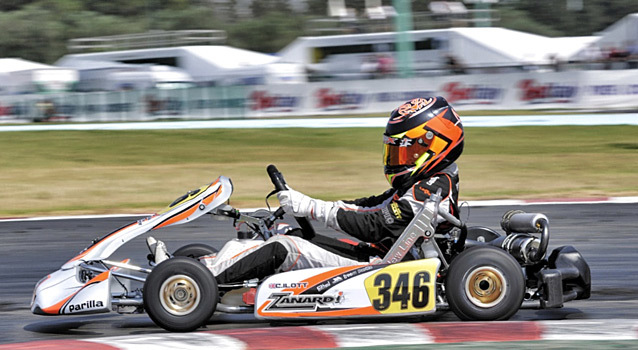 Best time to Ilott in KF3. The Englishman Callum Ilott (Zanardi-Parilla-Vega) impressed in KF3, winning the Superpole after overtaking all the drivers who were ahead of him in Qualifying clock. His compatriot George Russell (Intrepid-Vortex-Vega) was second, ahead of the French driver Dorian Boccolacci (Intrepid-TM-Vega), while the championship leader, Spaniard Alex Palou (CRG-BMB-Vega) was fifth.

Other results. Roberto Toninelli (Birel-BMB-Bridgestone), took the KZ1 pole before the French driver Kozlinski (PCR-TM-Bridgestone). The championship leader, the Belgian Rick Dreezen (Tony Kart-Vortex-Bridgestone), finished the seventh. The battle promised to be tight in KZ2, between the English driver Jordon Lennox-Lamb (CRG-Maxter-Dunlop) who set the fastest lap ahead of the category leader, Riccardo Negro (DR-TM-Dunlop). 60 Mini opened with domination from Leonardo Lorandi (Tony Kart-LKE-Le Cont), who took pole position from the Spanish driver Eliseo Martinez (Hero-LKE-Le Cont), who ended up with only the seventh fastest time .