Riccardo Negro (DR / TM) and Jordon Lennox-Lamb met again on the front row, this time, for the final. The Italian started perfectly, flawlessly followed by the British driver. Behind there was war between Dylan Davies (PCR / TM), Alexandre Arrue (Righetti / TM) and Simas Juodvirsis (Energy / TM). Arrue dropped to sixth on the second lap, Lennox-Lamb led an animated trio while Negro pulled away. Juodvirsis led the hunt for second place ahead of Davies. Further back, Marco Zanchetta (Energy / TM) was fast but still 1.5” back from Davies, the fourth. 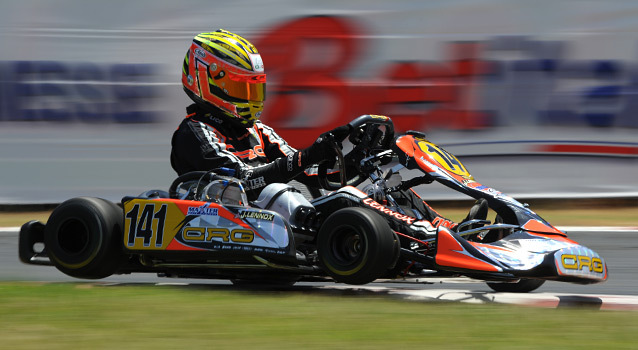 At the halfway point, Lennox upped the pace significantly, closing on the leader, Negro. Accustomed to finishing strongly, he seized the lead on the ninth lap, and the DR seemed to be having some problems and now had some direct pursuers. Indeed Juodvirsis took 2nd place on the 11th of 16 laps and Davies took third on the lap after. Lennox-Lamb won after a well fought race, in front of Juodvirsis, Davies, Zanchetta fourth and Negro fifth.