Kozlinski takes a lucky win in the final 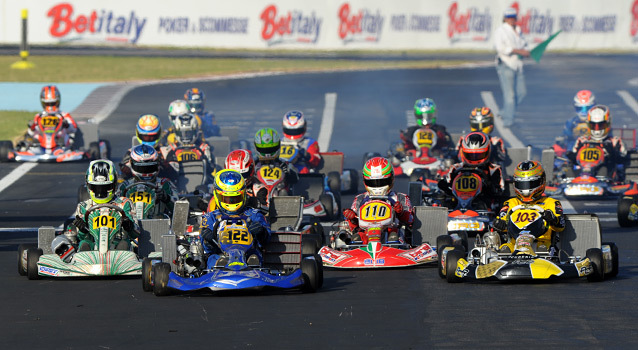 Bas Lammers (Praga / Parilla) started on pole, Kozlinski (PCR / TM) attacked at the first corner, Rick Dreezen (Tony Kart / Vortex) and Toninelli (Birel / BMB) stuck to the train of leaders. Lammers was eliminated in an unsuccessful attempt on Koko and Dreezen grabbed the lead on the same third lap. Kozlinski had not given up. Jorrit Pex (CRG / TM) followed in fourth position with Marco Ardigo (Tony Kart / Vortex) in his wheeltracks and Simo Puhakka (PCR / TM) close behind. The top 4 were grouped within 7/10, so the race was beautifully intense!

Ardigo was notified of a 10” penalty which relegated him to 13th in the standings, although he was still fifth on the track. Threatening for some laps, Toninelli attacked Kozlinski at the start of the 13th lap to take second place and Dreezen found himself with a lead of 9/10. But he faltered with two laps to go and Toninelli regained command of the race. Toninelli crossed the finish line raising his arms, without knowing that he was only seventh because of an immediately applied penalty of 10”. It was actually Kozlinski who won this mad rush to Pex and Puhakka, 4th was Sauro Cesetti (Top Kart / Parilla), 5th was Ben Hanley (ART GP / TM).