KF2: Fuoco has the advantage on Saturday night 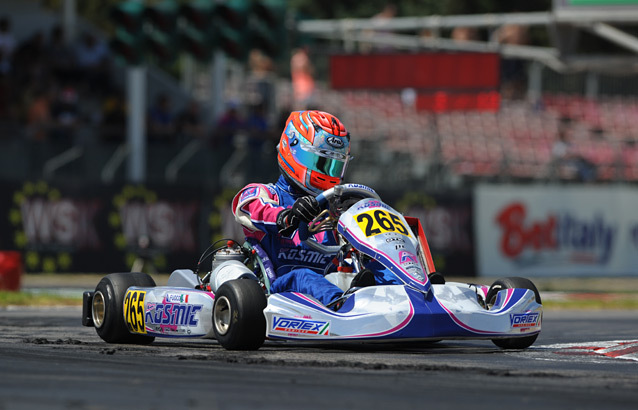 The 61 pilots in KF2 at the WSK Euro Series at La Conca will race in 3 more heats on Sunday morning to select the top 34 for the prefinal. At the end of the 12 heats run by Saturday night, the unofficial Kartcom intermediate classification shows Antonio Fuoco leading the way with four victories at the wheel of his new factory Kosmic / Vortex. He beat two other OTK drivers, Damiano Fioravanti (Tony Kart / Vortex) and Flavio Camponeschi (Tony Kart / Vortex). But the fight is very tight and Felice Tiene (CRG / BMB), who has always been in the top three, is currently in 4th place. In 20th, Max Verstappen (Intrepid / TM) lost a lot by scoring 20 points in his first heat. Scoring 3rd, 4th and 5th in the next ones, he does not seem able to produce his usual domination. For his part, Charles Leclerc (ART GP / Parilla) also experienced problems and found himself in 13th position, but appears to have greater potential, although he was outperformed by his teammate Benjamin Barnicoat. The first French driver, although there are only three in the race, is Anthoine Hubert (Formula K / TM) on the 18th row, while Ingrid Girard (CRG / BMB) is 46th after some problems, and Kenny Marques (Kosmic / Vortex), improving regularly, is 53rd.