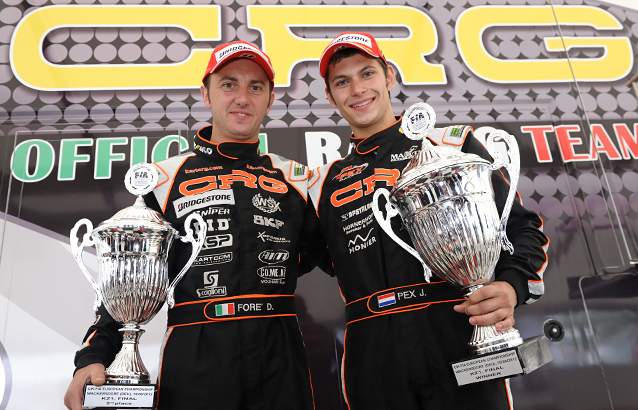 CRG has conquered the European title in KZ1 again, 4 years after Jonathan Thonon’s victory in Mariembourg. Winner in 2012 in Wackersdorf in a difficult week-end, the young Jorrit Pex was followed on the 2nd step of the podium by the expert Davide Fore’ which offered CRG a wonderful double success.

And yet, Wackersdorf meeting was not blessed by favorable conditions for the powerful karts of KZ1. The German circuit remains one of the trickiest and most winding circuits of the season. Changing weather conditions have made the task of technicians harder, since they had to make emergency adjustments to changes in the track conditions, dry, wet or mixed. In the light of this, CRG performance becomes even more valuable.

The 19 year-old Dutch driver Jorrit Pex (CRG/TM) has confirmed his great shape and his maturity, revealed since year-start. His performance was steady, always in the top 3, he won the final masterly thus becoming one of the youngest European champions in the category. A driver with an exceptional record of achievements, Davide Fore’ (CRG/Maxter) made a superb recovery drive after losing several places in one of the heats when he was sent off track. 6th in the pre-final, he attacked as fast as he could in the final and finished 2nd. Delayed in the qualifying heats by brake problems, Jonathan Thonon (CRG/Maxter) too recovered up to the top positions and finished 5th in the final, with the best lap in the race.

CRG: the importance of the mind for a driver

CRG is thinking of you!

Work in progress for the CRG Racing Team