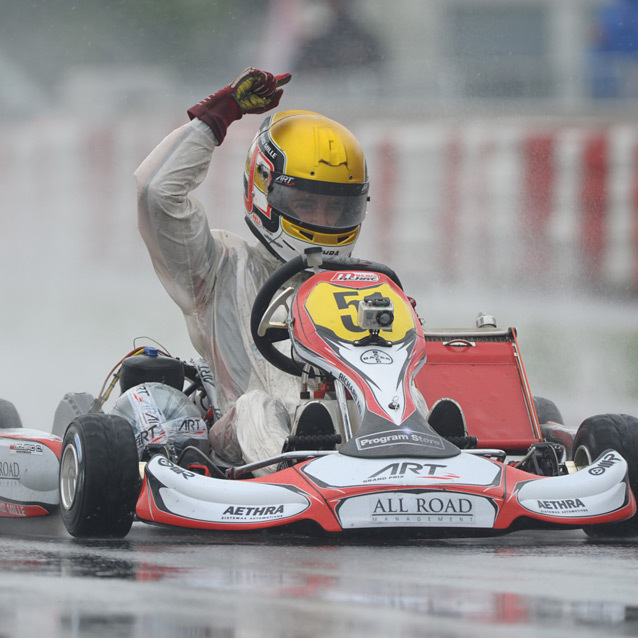 Max Verstappen (Intrepid / TM) was in the lead already on the first lap of the KF2 Race 1 ahead of Teemu Petjoi (Tony Kart / Vortex), Tom Joyner (LH / BMB) and Charles Leclerc (ART GP / Parilla). Petjoi spun on the second lap, Tereza Gromanova (Kosmic / Vortex) was in fourth position in front of Thomas Krebs (Maranello / TM) and Karol Basz (Birel / BMB). While Verstappen pulled away a duel was going on between Joyner and Leclerc for second place. Krebs was fourth in front of Basz and Gromanova. Dennis Olsen (Energy / TM) was 11th, Benjamin Barnicoat (ART GP / Parilla) 12th and Matthew Graham (Zanardi / Parilla) 14th, striving to come through the pack.

Antonio Fuoco (Tony Kart / Vortex) passed Niklas Tiihonen (Energy / Parilla) and Gromanova for the sixth position, while Stefano Cucco (Maranello / BMB) entered the top 10. Leclerc managed to take the advantage on the 7th lap and Joyner took second. Carlos Gil (Tony Kart / Vortex) was in seventh place ahead of Cucco and Barnicoat. Joyner lost third position in favor of Krebs. Leclerc needed to be wary of the Austrian, who was slightly faster.

On the 12th lap, Verstappen, who had more than a 3” lead, spun and Leclerc took the opportunity to seize the lead. The top four were grouped within 2 seconds, which is not much visually in the rain. Verstappen closed back up to Leclerc tenth by tenth, was preparing a new battle, possibly also including Krebs. Leclerc increased the pace to protect his leading position. The positions were stabile in the top 10. Furthermore, Anthoine Hubert (Formula K / TM) made a great recovery after a difficult start to the race.

Leclerc was again widening the gap and Verstappen no longer seemed able to come back or risk it all for the win. The Monaco driver won an incredible victory from the Dutch driver and the Danish Krebs. Joyner finished fourth from Barnicoat, Basz, Fuoco, Cucco, and Gil Graham. 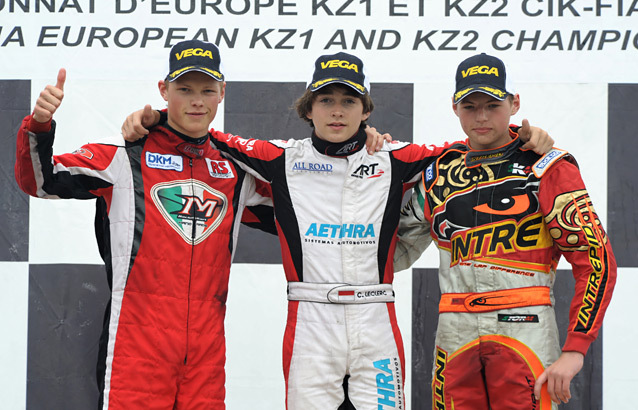