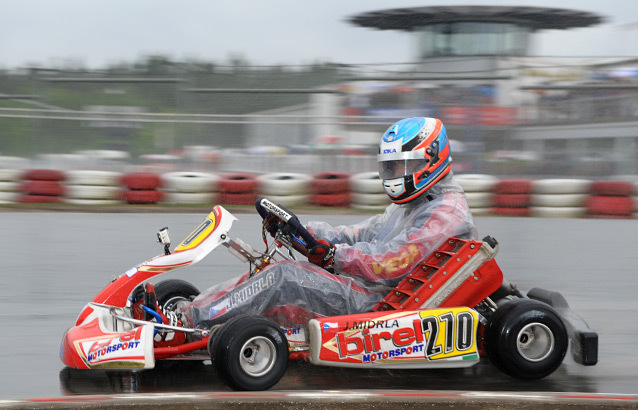 Already fastest in Qualifying Practice for the European KZ2 Championship, Jan Midrla (Birel-TM) showed incredible consistency at the head of the Qualifying Heats. In his 6 Heats, the Czech was always in the Top 3, hence his pole position for the Prefinal …

Other Drivers also set a great impression. Fast both in the dry and in the wet, the German Michele Di Martino (Energy-TM) won 3 Qualifying Heats after an 11th place in Qualifying Practice. So he took second place in the Intermediate Classification ahead of the Italian Flavio Sani (Birel-TM), second in Practice, the British Jordon Lennox-Lamb (CRG-Maxter), much improved from his earlier 24th place, and the Swede Douglas Lundberg (CKR-TM). Already in the Top 10 in Practice, the Swiss Kevin Gyr (Tony Kart-Vortex) and the Italian Marco Zanchetta (Energy-TM) confirmed their positions. Behind them, the Austrian Rene Oswald (Tony-Kart-Vortex) and the German Marcel Jeleniowski (Tony Kart-Vortex) improved their 33rd and 44th positions in Qualifying Practice. Completing the provisional Top 10 is Simas Juodvirsis (Energy-TM), defending his Lithuanian colours brilliantly.

Among the various performances in the Qualifying Heats, note should be taken of the 18th place of Ricardo Negro (DR-TM), who was a mere … 109th after Practice, as the result of a technical problem! No doubt the German will have dreams aplenty before tacking the Prefinal and the Final!