Home News International KZ1 Prefinal, Abbasse is Prince of Wackersdorf in the rain

KZ1 Prefinal, Abbasse is Prince of Wackersdorf in the rain 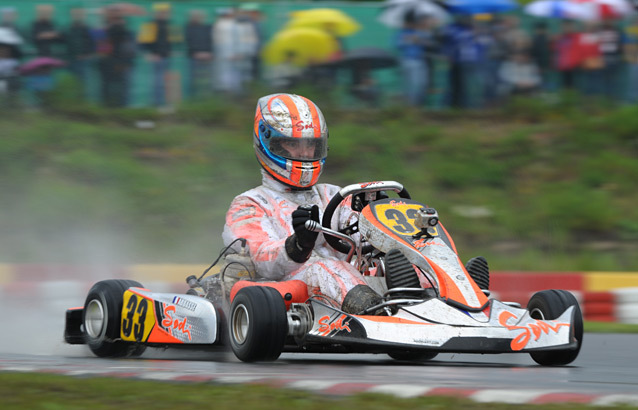 There was no question about tyres in the KZ1 Prefinal: wet tyres and a wet track were obvious, which may greatly change the situation. Kozlinski (PCR / TM) made the best start, but Jonathan Thonon (CRG / Maxter) took the lead on the first lap ahead of Jorrit Pex (CRG / TM) and the French driver followed by Paolo De Conto (Birel / BMB), Anthony Abbasse (Sodi / Maxter) and Bas Lammers (Praga / Parilla). Abbasse took 3rd on the second lap in front of De Conto and Ben Hanley (ART GP/ TM). In tenth, Patrik Hajek (Praga / TM) retired when a wheel came off. On the third lap, Thonon stopped, then rejoined the race in 17th position.

Abbasse overtook Pex on the fifth lap and took off at the front of the race. Kozlinski fell to the back of the pack. The duel was not over between the first two, who were already more than 7” from their pursuers, led by De Conto, closely followed by Hanley and Lammers. Abbasse hit the gas and pulled away from Pex. The attention shifted to the three-way battle for 3rd place. While Lammers passed Hanley to gain fourth position, Zdenek Groman (Kosmic / Vortex) and Fore (CRG / Maxter) came to join the fight. De Conto took advantage of the fight to get away before Lammers came back on him. Hanley and Fore fought for sixth place.

Behind Abbasse the winner and Pex in second, third position went to De Conto, followed by Lammers, Groman Fore and Marco Ardigo (Tony Kart / Vortex), fastest and the driver of an impressive recovery from his 29th place after the first lap.