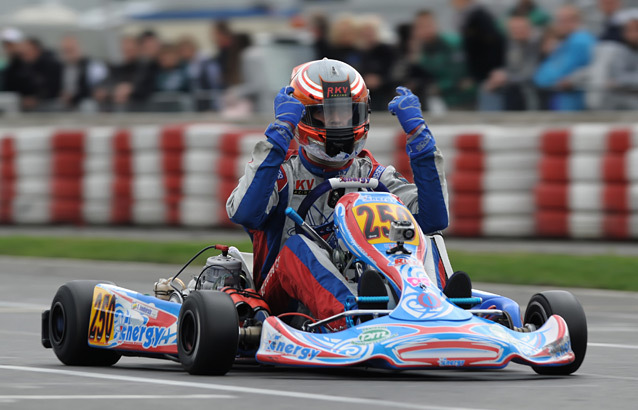 The track was virtually dry, and they were on slick tyres, but the sky was very threatening, when the KZ2 final started with its share of uncertainties at Wackersdorf. Simas Juodvirsis started first on the outside line, ahead of Marcel Jeleniowski (Tony Kart / Vortex) who gained two places, but soon dropped back. Marvin Meindorffer (Tony Kart / Vortex) recovered second position ahead of Riccardo Negro (DR / TM), Leonid Panfilov (BRM / TM), Jordon Lennox-Lamb (CRG / Maxter) and Martin Doubek (Praga / TM).

Negro dropped down to 11th position, Dylan Davies (PCR / TM) took fourth ahead of Michele Di Martino (Energy / TM). Moving forwards prominently at the start, Alexandre Arrue dropped to 27th, Charles Fiault (Sodi / Maxter) was two places behind, but the timing seemed wrong on that count, as though there was a transponder problem. Davies took third position by overtaking Panfilov. Fiault went into 14th place, just ahead of Jan Midrla (Birel / TM), while Clement Da Silva (Praga / TM) struggled in around 20th position.

Lennox-Lamb lost some places, Andreas Fasberg (Tony Kart / Vortex) was now sixth ahead of Marco Zanchetta (Energy / TM). Juodvirsis was leading the race by 1.5”, Meindorfer second, Di Martino took third from Davies. Zanchetta retired with a mechanical problem. The times went down as the grip of the track increased. The race was ultimately not disrupted by the weather. Unless there was an incident Juodvirsis moved towards the title. Di Martino approaches Meindorfer in second, with a few laps to go he passed on the 23rd lap.

Simas Juodvirsis took a resounding victory, the European KZ2 Champion of 2012, with another Energy of Di Martino on the second step. Meindorfer finished third, ahead of Davies and Fasberg. Da Silva set the fastest race lap. 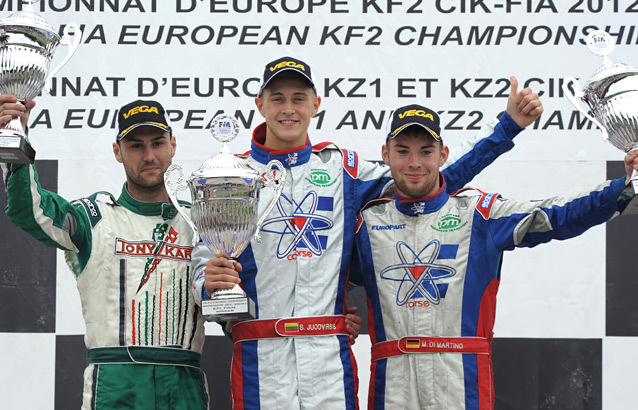