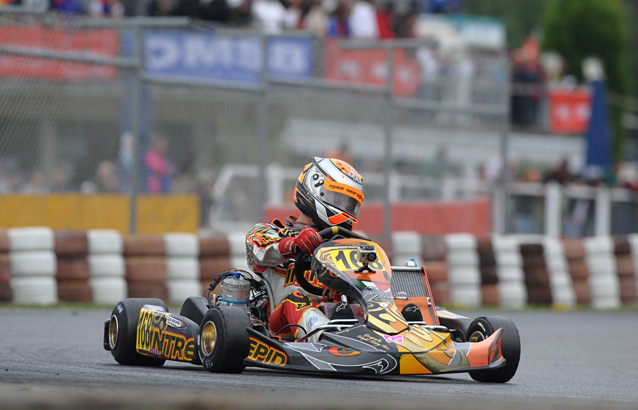 A few drops of rain begin to fall when the KF2 drivers rushed to the formation lap of race 2 of the European championship. Charles Leclerc (ART GP / Parilla) manouevred perfectly to fly at the lights, but he was caught out on the fourth straight. His machine was not very competitive with the ambient moisture. Benjamin Barnicoat (ART GP / Parilla) took the lead in front of Max Verstappen (Intrepid / TM) and Tom Joyner (LH / BMB). The track became slippery. Dennis Olsen (Energy / TM) grabbed third place, Max Verstappen took advantage of an error from Barnicoat to take the lead. Then Thomas Krebs (Maranello / TM) was in fifth ahead of Antonio Fuoco (Tony Kart / Vortex) and Alberto Di Folco (Tony Kart / TM). Leclerc was 12th.

The positions changed rapidly in the chasing pack. Nicklas Nielsen (Kosmic / Vortex) moved up to the fifth ahead of Anthoine Hubert (Formula K / TM), and Joyner gave up. Hubert attacked Krebs to gain 4th place. In mid-race, Verstappen had a lead of 4” in front of Barnicoat. Very far back, Tiene and Basz were the last two on the track. Camponeschi and Graham had long since given up. Barnicoat controlled Olsen couldn’t get near enough to second place, Hubert was back with third but was still far from the podium. Nielsen dislodged Krebs from fifth place. After a slump, Leclerc was back in the game: he came back from 12th to 7th position.

Approaching the finish, Olsen had significantly reduced the gap to Barnicoat who tried, unsuccessfully, to maintain his second place. But the Briton returned masterfully two corners before the line, and Olsen was 3rd on the line, while Verstappen won a masterful victory. Hubert was close again to Olsen and Barnicoat, but the race ended before he could try anything. Leclerc had found the performance limit, eighth at the finish and holding the fastest time on a drier track. 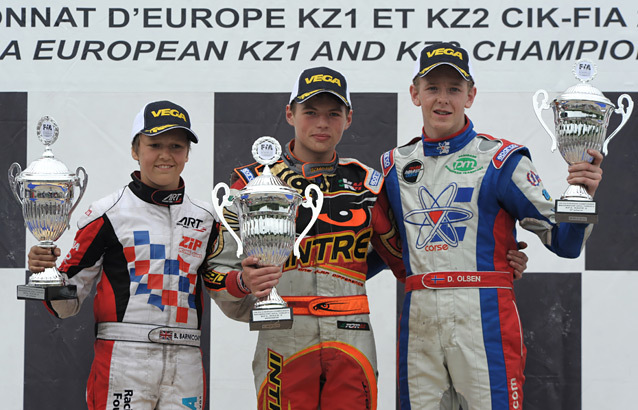