Euro KZ1 : Pex on pole for the Prefinal 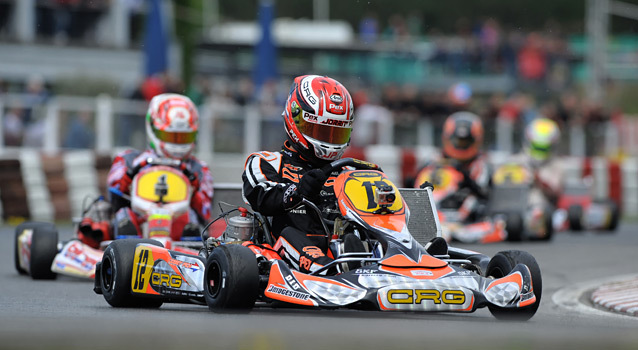 Again affected by changeable weather conditions, on Saturday at the European KZ1, KF2 and KZ2 Championships in Wackersdorf, Drivers’ nerves were again sorely tested. It was certainly a matter of combining a cool head and talent to be at ease under all conditions!

The 34 Drivers in the KZ1 category were less affected by the wet than their colleagues in the KF2 and KZ2 classes. In fact, the three Qualifying Heats for the top category of karts with gearboxes were held on a dry track, with just a few drops in the last confrontation. With two wins out of three, Jorrit Pex (CRG-TM) put in the best performance over the day as a whole, thus taking pole position for the Prefinal, which itself will determine the starting grid for the decisive Final. But the young Dutch driver knows that he will have to be tough to beat some fine opponents. Arnaud Kozlinski (PCR-TM) will start alongside him on the first row and behind them will be the European KZ2 Champion Fabian Federer (CRG-Maxter), the four-time winner of the World Cup Jonathan Thonon (CRG-Maxter), up from his 13th place after practice, and the pole man and European Champion Paolo De Conto (Birel-BMB). Of the Top 5, Jorrit Pex is the youngest (at just 19 years of age), and also the only one not to have won a major international title.

But to reduce the list of potential winners to these 5 Drivers alone would be to make a grave error. In a Final where anyone could win, the Belgian Rick Dreezen (Tony Kart-Vortex), the Dutchman Bas Lammers (Praga-Parilla), who was only in 19th place after Qualifying Practice, his Czech team-mate Patrik Hajek (Praga-Parilla), the Italian Marco Ardigo (Tony Kart-Vortex) and the British Ben Hanley (ART GP-TM) have not yet had their last say. It will be more difficult for the former runner-up Yannick de Brabander (FK-TM), only 20th, and Armand Convers (Kosmic-Vortex), on the podium last year, 25th after being involved in two collisions.