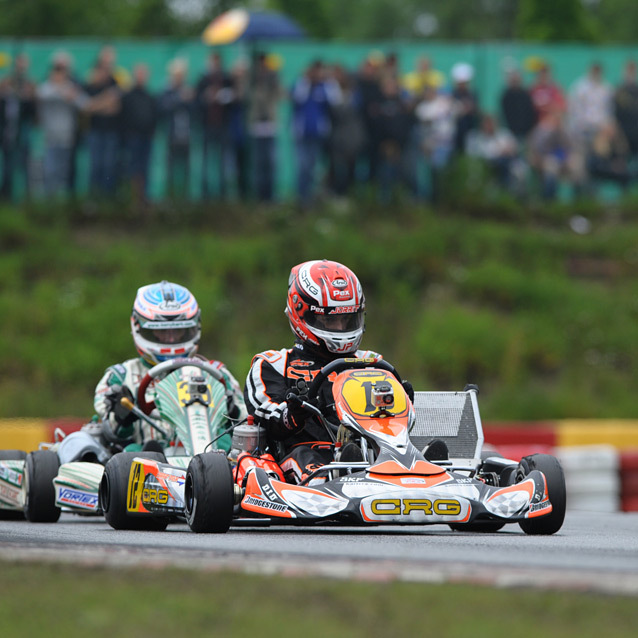 Wackersdorf was dry for the decisive final in the KZ1 European Championship of 2012, and it was already a pleasant surprise. Anthony Abbasse (Sodi / Maxter) started on the front row with Jorrit Pex (CRG / TM), followed by Bas Lammers (Praga / TM) and Zdenek Groman (Kosmic / Vortex). Lammers tried to sneak through, Abbasse remained mired on the outside, Pex flew in ahead of De Conto, Lammers, Davide Fore (CRG / Maxter) and Rick Dreezen (Tony Kart / Vortex). Lammers dropped to fifth on the second lap, ahead of Marco Ardigo (Tony Kart / Vortex). Dreezen attacked Fore for 3rd place on the next round. Jérémy Iglesias had already returned to seventh, the best performance of the early race with Kozlinski (PCR / TM) ninth ahead of Jonathan Thonon (CRG / Maxter), Armand Convers (Kosmic / Vortex) and Abbasse.

De Conto grabbed the lead on the fifth lap at the expense of Pex, Ardigo took Lammers for 5th, Kozlinski, the fastest, went into 8th. De Conto retired with mechanical problems on the seventh lap, Pex took the head ahead of Dreezen, Fore, Ardigo, Lammers, Kozlinski and Iglesias. Ardigo passed Fore, to go third. In seventh position, Thonon set the fastest lap. Behind Pex, the following four were grouped 7/10 off the leader.

Ardigo passed his team mate Dreezen on lap 11, Fore took the opportunity to follow into third position. In 6th, Kozlinski defended Thonon and then passed Dreezen. We were seeing a consolidation at the front. Ardigo was looking dangerous to the leader Pex and passed with eight laps remaining. Kozlinski was now fourth from Fore after passing Lammers. Pex was fighting to get back on terms with Ardigo, but it didn’t really seem possible, even though the difference was small between the two men. Fore got a bit of a gap, Kozlinski had to watch out for the increasingly urgent threat from Lammers.

After a great race, Ardigo passed the finish line as winner and champion, but he then had the unpleasant surprise of being excluded after weighing in 600g less than the minimum weight, due to excessive fuel consumption which remained unexplained. Jorrit Pex therefore won the European KZ1 Championship from Davide Fore and Kozlinski, and Bas Lammers finished fourth. 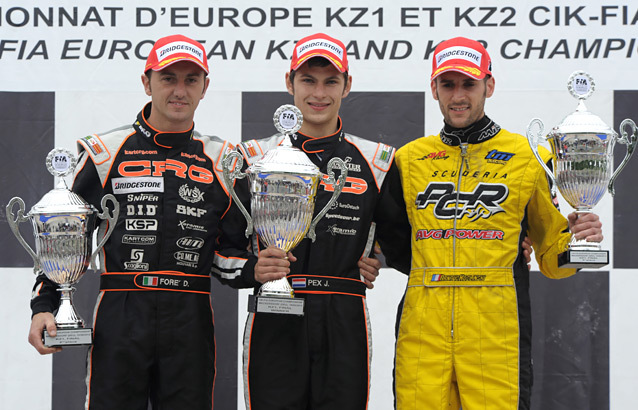