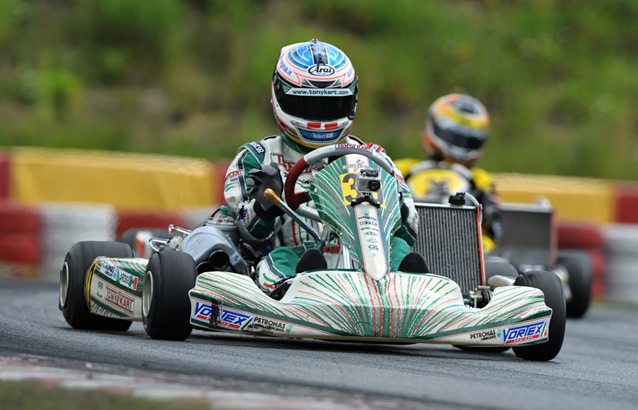 In second position from the third lap, Marco Ardigo (Tony Kart / Vortex) pushed Kozlinski (PCR / TM) before he took the opportunity at the right time to complete the race ahead of the French driver, undoubtedly helped by his nearly new tires. Fabian Federer (CRG / Maxter) led for most of the race before giving in to Jorrit Pex (CRG / TM) who finished third. Paolo De Conto (Birel / BMB) didn’t miss the start, but had to settle for 5th place at the checkered flag. Jonathan Thonon (CRG / Maxter), very fast, finished after Danny Bleek (MS Kart / VM) who took sixth place, while Roberto Toninelli (Birel / BMB) was ranked eighth ahead of Bas Lammers (Praga / Parilla) who was more comfortable at the end of the race, then Anthony Abbasse (Sodi / Maxter).

The fastest lap was from Rick Dreezen (Tony Kart / Vortex), who was 12th in front of Thomas Mich (Birel / TM). Davide Fore (CRG / Maxter) lost ground by going off several times at the same corner, taking Hanley with him, and Armand Convers (Kosmic / Vortex) retired for the second time.