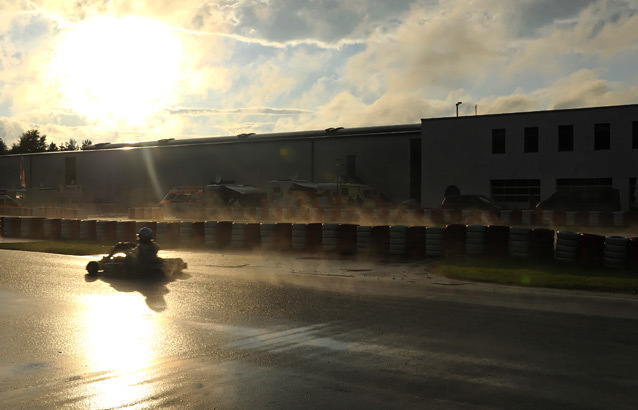 The extremely full programme for the Qualifying Heats began on Friday for candidates for the titles of European KF2 Champion (Hopefuls) and KZ2 Champion (second division for karts with gearboxes). But the programme was interrupted by heavy rain, which at times caused partial flooding of the track. Although some delays arose, all the Qualifying Heats took place as normal.

In KF2, 10 of the 21 Qualifying Heats were contested and three Drivers made a good impression: Max Verstappen (Intrepid-TM), Netherlands, winner of the three Heats in which he was involved, Charles Leclerc (ART GP-Parilla), Monaco, who won 2 of his 3, and Tereza Gromanova (Kosmic-Vortex), Czech Republic, still in the leading group although she did not assert herself on Friday. Among the other Heat winners were the Italians Flavio Camponeschi (Tony Kart-Vortex) and Felice Tiene (CRG-BMB), who both also fought a more difficult Heat, as well as Niclas Nylund (ART GP-Parilla), Finland, Robin Hansson (Tony Kart-Vortex), Sweden, and Karol Basz (Birel-BMB), Poland.

For their part, KZ2 Drivers also fought 11 Qualifying Heats (also out of a total of 21) and there were no fewer than 10 winners. This statistic alone shows the intensity of the battle! The only Driver to win twice, Kenneth Ostvold (Energy-TM), Norway, was forced to abandon in his first Heat. So the best placed on Friday evening was the Czech Driver Jan Midrla (Birel-TM), who confirmed his pole position by leading the pack both in the dry and in the wet. The other Heat winners were Ricardo Romkema (Energy-TM), Netherlands, Flavio Sani (Birel-TM), Italy, Michele Di Martino (Energy-TM), Germany, Jordon Lennox-Lamb CRG-Maxter), Britain, Marco Zanchetta (Energy-TM), Italy, Thierry Delré (Sodi-TM), Belgium, Clément Da Silva (Praga-Parilla), France, and Alessandro Fabiani (CRG-TM), Italy. Even without winning, other Drivers also made their ambitions known, with Kevin Gyr (Tony Kart-Vortex), Switzerland, Adam Janous (Praga-Parilla), Czech Republic. Michael Christensen (Energy-Vortex), Denmark, and Marcel Jeleniowski (Tony Kart-Vortex), Germany, still in the leading group.

The Saturday programme for Wackersdorf will be particularly busy with a continuation (and the last) of the Qualifying Heats. We will then know the names of the 34 finalists in all categories. But for the Drivers, they still have a long way to go…