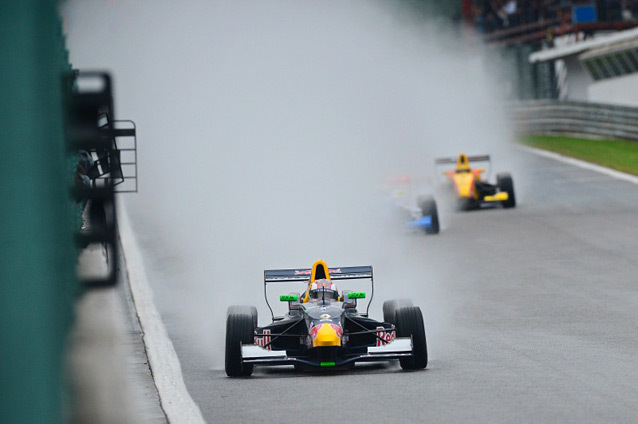 The second Eurocup Formula Renault 2.0 race of the weekend played out in testing weather conditions, with a soaking wet track and poor visibility. Daniil Kvyat (Koiranen Motorsport) managed to overcome these various difficulties to record his third victory of the season. He was joined on the podium by Jake Dennis (Fortec Motorsports) and Stoffel Vandoorne (Josef Kaufmann Racing).

The rain came to make life difficult for the drivers in the second qualifying session. In the first group, Oliver Rowland (Fortec Motorsports) pipped Stoffel Vandoorne to the fastest lap at the end of the session. But the best time overall went to Andrea Pizzitola (R-Ace GP), who topped the second group. The Frenchman secured his maiden pole position and lined up on the front row alongside Oliver Rowland.

On a wet track, Andrea Pizzitola and Daniil Kvyat were the leading pair as they entered the Raidillon. The Frenchman took a detour off the track, however, and fell back several places. The poor visibility then led to a collision between several drivers. Norman Nato (RC Formula), Victor Franzoni (Koiranen Motorsport), Stefan Wackerbauer (Koiranen Motorsport), Dan de Zille (Fortec Motorsports), Yu Kanamaru (KTR), Oscar Tunjo (Tech 1 Racing), Matthieu Vaxivière (Tech 1 Racing) and Javier Tarancon (RC Formula) were all involved, and the race was consequently interrupted by the red flag.

The race started for a second time, under the safety car, with Daniil Kvyat in first place ahead of Stoffel Vandoorne, Jake Dennis and Oliver Rowland (Fortec Motorsports). Vandoorne then had second place snatched from him by Jake Dennis at La Source hairpin. Paul-Loup Chatin (Tech 1 Racing) also caught the eye by overtaking Miki Weckström (KTR) and moving into fifth place.

Daniil Kvyat, still in first place, used his position in front to build a lead of around two seconds, even though Jake Dennis did then match the pace of the leader. Further back, Stoffel Vandoorne was keeping Oliver Rowland at bay, while the chasing pack was led by Paul-Loup Chatin. Josh Hill (Fortec Motorsports), son of Damon Hill, then took his turn to shine by removing Ignazio d’Agosto from seventh place.

The race was then stopped by another red flag and did not resume, after Alex Riberas (Josef Kaufmann Racing) went off the track. This meant Daniil Kvyat was declared the winner of a turbulent race, with Jake Dennis and Stoffel Vandoorne finishing second and third respectively. With his third win in four races, Russia’s Kvyat extends his lead in the Eurocup Formula Renault 2.0, with Stoffel Vandoorne now in second place.

Daniil Kvyat: “The race conditions were very difficult, and I knew it was important to get away in front at the start. I took risks and they paid off. It was nervy and it wasn’t easy to manage things while the race was interrupted. I benefited from having better visibility than the others, and this made the difference. It’s an important victory after my relatively below-par performance in the first race.”

Jake Dennis: “I started well and moved up to third. When we started for a second time, I attempted an attack on Stoffel Vandoorne. I didn’t have any particular pressure on me as I’m not competing in the entire championship. It worked well. I hadn’t expected to challenge for the podium in the Eurocup Formula Renault 2.0, so it’s a great result.”

Stoffel Vandoorne: “Two podiums at Spa-Francorchamps is a good return. The only thing I regret about today is the fact that Daniil Kvyat extended his lead by winning the race. Although I didn’t win, it’s a pleasure to drive in front of so many people, despite the bad weather.”