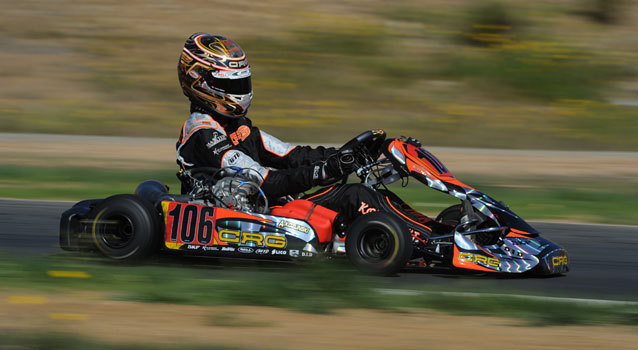 Brice De Gaye (DR / Parilla) was at the front of the first 4 laps of the KZ session, Group 1, while the other drivers were waiting. An initial hierarchy emerged between Marco Ardigo (Tony Kart / Vortex), Jérémy Iglesias (Intrepid / TM) and Yannick De Brabander (Parolin / TM), but the times decreased more and more approaching the end of the sessions and the positions were shuffled. Rick Dreezen (Tony Kart / Vortex) was the leader before Ardigo, but Ardigo set the fastest time in his last lap with 55,013, ahead of his teammate Dreezen, Bas Lammers (Intrepid / TM), Iglesias and De Brabander.

Patrik Hajek (Tony Kart / Vortex) took most of the competitors on the track while the clock had more than 5 minutes remaining for group 2 which was well overdue. Dylan Davies (PCR / TM) set several successive fastest laps before Armand Convers (Kosmic / Vortex) slammed in 55,415, followed by Davide Fore, Jonathan Thonon and Mirko Torsellini on CRG / Maxter. Kozlinski (CRG / Maxter) moved to the front, Paolo De Conto (Energy / TM) got into the top 3.

The pole time was therefore 54,988 for Kozlinski with a masterful time, the only driver below 55”, even though he was in the slowest group.

Entries accepted for the WSK Super Cup by MINI