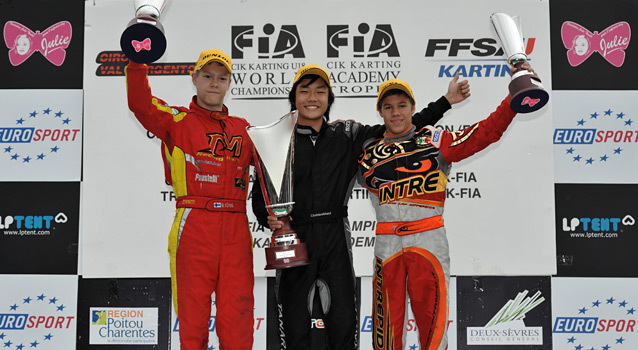 A few drops fell on the track and this could disrupt the final of the U18 World Championship. Tension is at its peak …

“Top” Sathienthirakul took the lead from Köykkä, Sam Snell, Jake Dennis, Damiano Marchesan, Niklas Nylund and Vincent Fraïsse. Teemu Suninen went off at the first corner and it was all over for his title chances. Adam Stirling and Kasper Larsen were back in 6 and 7th at the expense of Fraïsse. Nylund tumbled to 27th position, Suninen was 31st. Easthope and Jones have already given up.

Top was a strong leader, ahead of Köykkä by 4 / 10, and Snell and Dennis, virtually the world champion. John Norris set the fastest time and made a good recovery to 9th position since from his 31st grid position. Aside from that, nothing much happened in mid-race. Fraïsse was soon ninth behind Stirling then reversed the positions.

Marchesan overtook Dennis, he was now 4th. He attacked Snell. Meanwhile, Norris and Stefan Riener continued their ascent, 5th and 6th. In third, Marchesan lost 2 places. Behind the irremovable leaders, Sathienthirakul and Köykkä, Norris was threatened and his setback happened when braking on the third lap from the end.

The situation in U18 on Saturday night