Bell Racing Europe (www.bellracing.info) has the immense pleasure to announce that, on September 3, 2008, it completed certification of the Bell KC3, the very first helmet in the world to meet the new CMH Standard, devel-oped jointly by the FIA Institute and the Snell Memorial Foundation.

The Snell Memorial Foundation (www.smf.org) is a non-profit organization dedicated to research, education, testing and development of helmet safety standards. Since its founding in 1957, Snell has been a leader in helmet safety in the United States and around the world.

The objective of the FIA Institute (www.fiainstitute.com) is to promote improvements in the safety of motor sport and monitoring motor sport safety trends in order to identify research and regulation priorities. Amongst many other projects, the FIA Institute conducted a new research programme to develop safer and lighter helmets designed specifically to meet the requirements of younger drivers.

Driver helmets were so far made for adults only and the standards used to approve them were tested on adults. The new CMH standard has been scientifically developed to create helmets designed for all young racing drivers. In order to elaborate this standard, researchers examined and measured the growth rate and development of the human head from age six onwards, including Snell’s supported research on children’s neck strength and head and neck anthropometry.This was an important project as adult helmets tend to be heavy and too big for younger drivers. And just making them smaller does not necessarily do the job. Several helmet shapes and sizes were defined, for 7 to 11 olds and for 12 to17 years olds. It lead to the creation of a Youth Helmet Standard that will soon have to be attained by all young driver’s helmets.

Bell Racing Europe R&D unit, lead by Senior Engineer & Vice-President Jim Sundahl, were able to quickly develop the Bell KC3. The KC3 is inspired from the Bell HP3 Advanced Helmet, which is by far the most sold F1 approved helmet (FIA8860 standard) around the world. The KC3 shell is entirely hand laminated by highly skilled technicians, using advanced composite materials, including carbon fibre and Kevlar and is combined with a specific energy absorbing liner in multiple densities. The radical and innovative HP3 inspired aerodynamic design includes a front chin spoiler (duck bill) and a very effective ventilation, even at the lower speeds reached by go-karts, on both the chin bar and the top area. The Bell KC3 (size XS), weighs only 1185 grams (+/- 3%). 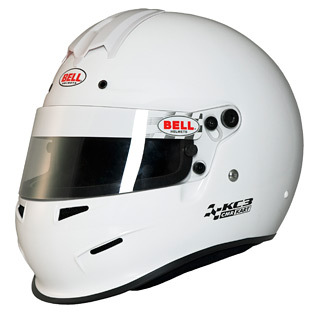 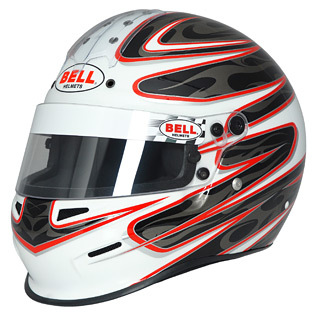