The favorite Arnaud Kozlinski (CRG / Maxter) relived the nightmare of the European Championship in Braga at La Conca: betrayed by his engine, he had to give up the world crown he was promised. On the 3rd lap of the final Kozlinski stopped under the rostrum. Therefore, the race took another face. 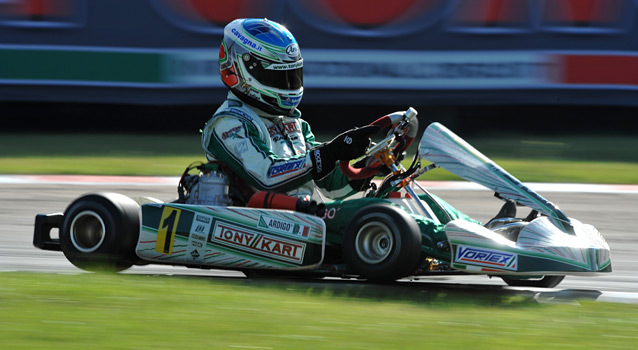 Marco Ardigò inherits the lead, followed by his team-mate at Tony Kart / Vortex, Gary Catt. 3rd was Davide Fore (Maranello / Maxter) who was threatening and took second place. Jason Parrott (Birel / Parilla) followed in the attack. Catt soon resumed his position, Fore even let Stevens into the story. Another Birel seemed in very good shape – the young Czech Libor Toman. On the 5th lap, he passed Stevens and found himself in the wake of Fore.

Behind, there was Manual Renaudie (Gillard / Parilla), particularly incisive in front of Nikolaj Bollingtoft (Kosmic / Vortex), Matias Laine (TonyKart / Vortex) and the Birel of the Japanese driver Ishii. Catt attacked the leader and took command. Renaudie lost some places in favor of Stevens. Anthony Abbasse (Sodikart / TM) forced his way into 13th position. The gap widened when both Tony Karts pushed to achieve their ambitions. Parrott did not seem able to make an impression on them.

This is where Toman moved into the spotlight: he passed Fore on the 9th lap and moved to the front. Ardigo reappropriated the lead and escaped. Toman dispatched Parrott and started to work on Catt. Behind Fore, who was in 5th, Stevens, Bollingtoft, Laine, Renaudie, Litchfield, … On the 15th lap, Toman was with Catt then moved beyond him. He put his head on the steering wheel in the hope that the impossible could happen, and he could join Ardigò. The gap grew quickly with Catt, but reduced with the leader.

The final rounds were restless down the field. Fore lost places in favor of Bollingtoft, Parrott had to retire, and Renaudie took to the grass after contact with an opponent. Mark Litchfield (Maranello / Maxter) going well, gaining places up until lap 23. But there was disappointment following the joy, when his engine failed a few turns later. 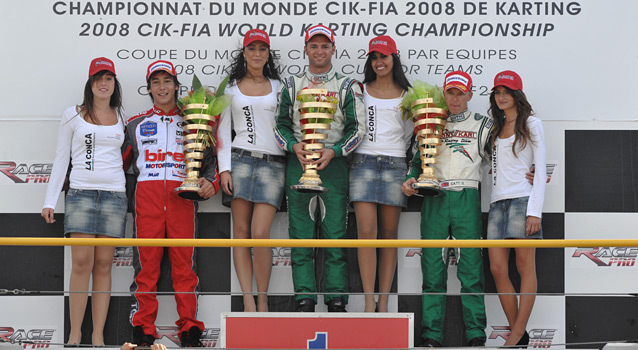 Marco Ardigò is world champion for the second consecutive year with the Tony Kart / Vortex team.