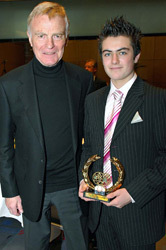 Lincolnshire kart racing star, Jack Harvey, finally picked up his European Championship trophy last weekend at the CIK-FIA award ceremony in Monaco. The Newark Steel backed youngster was one of several international kart racers to receive their 2007 spoils at the glamourous event, where Jack was lucky enough to meet FIA President, Max Mosley.

After a fantastic 2007 season the awards ceremony was the final curtain on newly signed Birel Motorsport driver Harvey’s time in the KF3 category. It was also a chance for him to take in the sights of the Formula One playground, Monaco.

“It was an amazing couple of days in Monaco,” sad Jack. “The awards were fantastic. There were a lot of categories and there were a lot of British drivers receiving awards, which was good. It was great to finally receive the official award for winning the European Championship. It closes a door for me on KF3 and I can concentrate on picking up where we left off in KF2 from the start of next year now.”

“It was a little bit surreal when I first arrived. As someone who wants to be a professional racing driver it’s one of the places that you dream about going to and spending time. To actually get to see it and the lifestyle, it’s certainly made me want to achieve everything that I can. It puts all the hard work and effort into perspective.”

Although his racing activities for the season have ended for this year, Jack will be back in action almost as soon as the New Year starts, when he takes part in a 24 hour kart race at the Autosport International Show in early January.

“I’m really looking forward to the Autosport Show,” said Jack. “Even thought my season has only just ended, it means that the new one is about to get underway. I am going to be really busy over the course of the show and the 24-hour race should be really good fun.

Apart from being in action in the twice-around-the-clock marathon, Jack will be on the Alpinestars stand over the course of the show, as well as taking in the new for 2008 Karting Show section of he event, where he will be talking about his incredibly successful 2007 season on the main stage over the weekend. 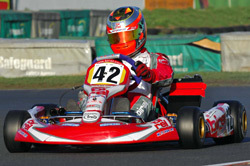 The shiny new Birel ART website is now on line