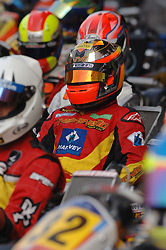 This result is not really consistent with the usual performance of Jack the Champion. The explanation is that he was caught in a crash when a rival made a mistake in front of him in the first session, and chassis damage meant he was not able to set a faster time. The team was forced to change the axle for the morning. Next year, nothing is known about Jack’s plans apart from his move into KF2. Is he changing team? What will he be on? Apparently nothing has been decided, or at least nothing has been announced, apart from Jack’s ambition!

Cancellation of the Monaco Kart Cup 2012