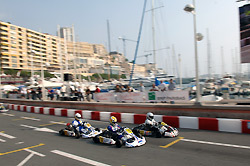 After two series of timed laps the 4-Stroke Contest drivers now know the line-up for their category. Claudio Mack, diving a Vampire-powered Zanardi came out on top of both sessions, and will start in pole position in tomorrow morning’s qualifying heats.But just three-tenths of a second behind is Giorgio Pantano (Zanardi/Oral), a rival to be reckoned with. Luca Giacomello (Zanardi/Oral) and Thomas Barrow (Corse/Vampire) had 3rd place nicked from under their noses by Anthony Puppo (Energy/Oral), who was a full second faster in the second series than he was in the first. Sixth-placed driver is Dutchman Thijs Aan de Stegge (BRM/Vampire) and behind him comes Daniele Dallari (TonyKart/Oral). The two types of engine on show, Oral and Vampire, seem to be evenly matched for the time being, with each maker having 5 karts in the top ten.

Starting grid of the 4-Stroke Conquest

Final of the 4 Stroke Contest